Brainfuq, an interpreter for the language Brainfuck built with ANTLR

There are currently no ready-to-use executable binary now but it’s coming soon.

There are a few interesting demos in ./BrainfuckDemo/, and you can just try them out.

Below is the commands table for Brainfuck:

ANTLR (ANother Tool for Language Recognition) is a powerful parser generator for reading, processing, executing, or translating structured text or binary files. It’s widely used to build languages, tools, and frameworks. From a grammar, ANTLR generates a parser that can build and walk parse trees.

ANTLR 4 is the backbone of Brainfuq and it’s very powerful.

ANTLR 4 is so declarative we can use it to build amazing grammars just like writing Context Free Grammars in Compiler Principle.

So implementing Brainfuck is super easy just like below:

And then antlr this .g4 file to generate the parser, tokens, visitor and lexer.

After generating the parser, tokens, visitor(a visitor template) and lexer for brainfuck, it’s time for us to walk through the Parse Tree manually.

Inside the class BrainfuqBaseVisitor, we can see four methods which return generic-typed values:

These are the visiting methods we should override and implement in our own way.

User input is an essential part of an interactive program. Since we are building a command line tool, which is also what most language interpreters offers.

Building a command line tool with Java is fun. And building a good one takes time.

There are two ways to use Brainfuq, one is brainfuck filename which interprets a whole brainfuck text file and print out the result, and the other one is brainfucki which brings the user into the Brainfuck REPL Evironment.

To implement brainfuck filename, we can just simply read in the entry argument of public static void main(String args[]) and treat is as the file name and then read in the file as file stream as follows:

What’s taking up most of the time is building the REPL Evironment.

Above is a LISP style definition of REPL. In case you don’t know, REPL is short for Read-Eval-Print Loop, basically it’s like read a line, evaluate the line, print the result and loop from the start.

So, how do we construct the REPL?

A simple while (true) loop in Java will do the loop thing of course.

Below is how Brainfuq reads code line by line:

Then we interprete this single line of command. Oh and, you would always want to reset the status of the data pointer and in Brainfuck because you want every loop to start from a clean state. So we do:

And we want to print colored text in our REPL so that the user won’t get bored and confused. Code Highlight is so important after all.

How do we print colored text using Java’s System.out.print()? The answer is ANSI Color.

By using ANSI Colors we made this happen: 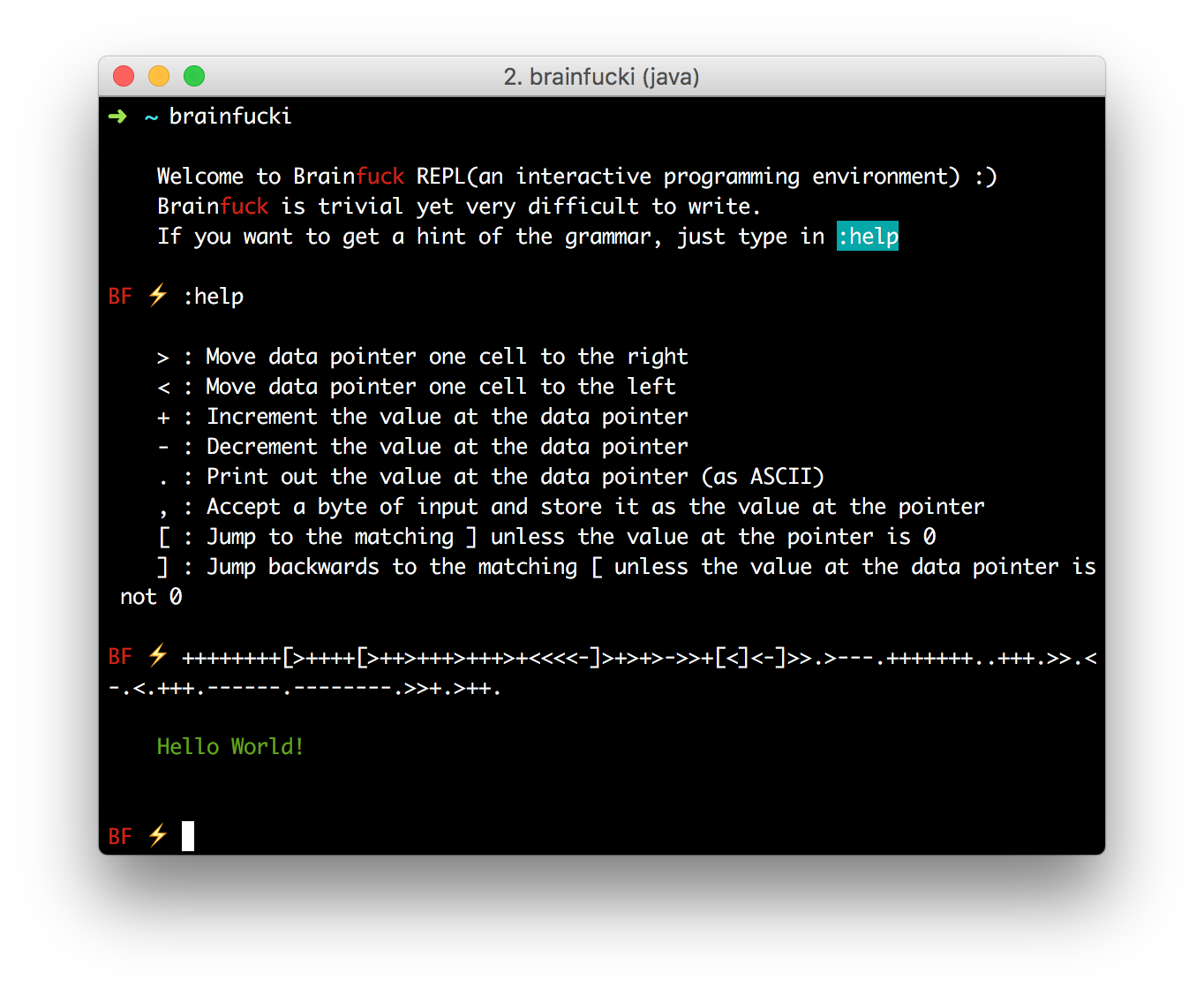 We added some emoji flavors to our beloved Brainfuck. Brainfuq now has full support for pure emoji (unicode) and mixed-style programming.

Everyone loves syntactic sugars as they make coding easy and fun. So I was thinking what about adding support for emoji just like what Swift (Apple’s open source language) did.

Now Brainfuck has a new, interesting, and intuitive command table:

And below is our emoji version of Hello World:

Achieving this is actually easy.

You may be thinking that, should we write another .g4 file like brainfuckEmoji.g4? I actually tried that. And sadly it did not work out because the parser and lexer generated by ANTLR 4 does not recognize unicode emoji at all!

So a little trick is needed here.

We do it by character replacing (so easy that I’m even a little bit shy to admit it).

We read in the code, change the emoji (if there are any emojis) into it’s coresponding token and then lex and parse it. All set.

When you’re working with a Terminal, you would usually use your up and down arrow key to navigate through all your history commands in your command stacks.

We want to do this in Brainfuq REPL too, I mean, although many language interpreters actually don’t support this feature because of some limitations, I would still want to do this.

In Java command line applications, detecting arrow keys are nasty. So this is a TODO

About Better Error Handling, here’s thing: right now Brainfuq REPL has a major problem, that is, when you input an unfinished line of code and you would like to hit Enter to continue the code in a new line, Brainfuq does not know you’re continuing your code. It just interprets your unfinished code, which is the first line as soon as you press Enter(\n). And what Brainfuq needs to do is analyze your code and know it’s unfinished and only interpret the code if the code is finished (The AST is complete). This is another TODO